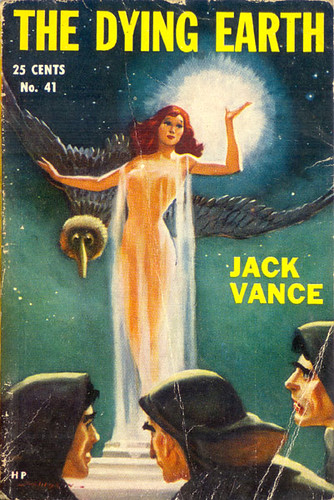 What: Jack Vance's classic science fantasy mashup series The Dying Earth, written sporadically from 1950 to 1984 and collected in the compendium Tales of the Dying Earth.

Why: There are sometimes so many great choices in a category that I struggle to choose the most beautiful one. This isn't one of those times. Vance's Dying Earth is so far ahead of all other fantasy series that it contends for best series of any genre. Set on our world so far in the future that the sun is about to wink out, it barely resembles the earth we know. Thousands of civilizations have come and gone, and the remaining few are crumbling in decadence. Sound bleak? Hardly. The end of the world is a canvas for the most hysterical stories ever to be labeled fantasy. Or sci-fi. Or whatever it is. Vance's world is held together by two powerful forces: magic and gullibility. It's a setting where a character can exclaim "So then: onward to Lumarth, and let meticulous discretion be the slogan!" and you just know something amusingly terrible is going to happen. That's particularly common for the putative hero of the series, Cugel the Clever. An immoral and cowardly sorcerer of meager skill, Cugel fancies himself a ladies man. This rarely works out for the ladies themselves: in a memorable interlude, Cugel cons his way into a princess's chamber, foils an assassination attempt, becomes the city's ruler, battles a ghoul, kidnaps the princess, and trades her to barbarians for safe passage, all in fifteen pages. Vance's acidic economy of words makes him the anti-Tolkien, never slowing his pace to let the reader know how smart he is. That, Vance presumes, will take care of itself.

Impact: Vance's planet usually shows up somewhere just below Middle-earth in the discussions of the greatest fantasy settings of all time. An entire subgenre was backformed from the Dying Earth series, encompassing works by Wells and Lovecraft. The stories' most notable impact was on the game Dungeons & Dragons, which co-opted Vance's fire-and-forget magic system for more than a third of a century. You'll see little bits of it sprinkled in the game, as in the name of the arch-lich Vecna (just flip that last bit) and a spell named after the Excellent Prismatic Spray. The series isn't quite the cornerstone that Middle-earth is, but it's still doing its part to hold up the castle.

Personal Connection: I had two gargantuan gaps in my fantasy knowledge when I became a creative director for D&D. One was The Lord of the Rings, which I found flabby and unfulfilling (but put down the torch and pitchfork, because I love the movies). The other was this series, which my fellow creative director Rich Baker lent me in the early aughts. I'm not sure I've ever read a 700-page book that fast. In addition to enjoying the compact writing style, I reveled in the baser adventures of fantastical antiheroes, my preference for which is about to become abundantly clear.

Other Contenders: Michael Moorcock's tragedy of albino emperor Elric of Melniboné; the leper-out-of-water chronicles of Stephen R. Donaldson's first Thomas Covenant trilogy; Fritz Leiber's decadent Fafhrd and the Grey Mouser books; Kij Johnson's feudal Japanese Love/War/Death novels, where you can eavesdrop on a fox and her human paramour; Terry Pratchett's ribald Discworld stories, which logically proceed from the world being a disc resting on four elephants on a giant space turtle; the first three books of C.S. Lewis's fabulous Narnia series (okay, I don't only like antiheroes).
Collapse